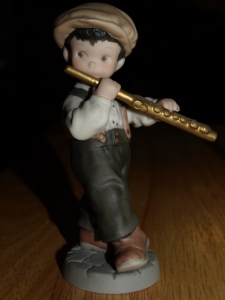 I started playing flute when I was 12, and almost immediately after starting lessons, I began collecting flute player figurines. My teacher gave me my first one and my collection has grown exponentially since then. It’s not terribly easy to find flute player figurines that aren’t angels, and even with angels, they tend to be seasonal, arriving on store shelves only at Christmas time. When you find one that’s unique, you have to get it when you see it. I have many unique figurines in my collection – a giraffe, Friar Tuck, and a dragon playing a flute  just to name a few. This little boy outdoes all my other flute players, combined as far as his meaning in my collection.

I got this figurine at the World Trade Center Mariott a couple of weeks before 9/11.  I was there for a convention with a friend of mine, and I had the same see-the-hill-take-the-hill mentality with this purchase as I had with the others.  I told my friend I wasn’t sure if I’d ever get back and he would be a great souvenir of the trip.

Little did I know the real truth. Shortly afterward, in the terrible aftermath of 9/11 I removed this little guy from my curio cabinet and looked at him for a few minutes, really looked at him. I could still see the crack where the end of his flute had broken when he was roughed up a little in my suitcase on the way home. I glued it back together, and except for the crack you could never tell anything had happened. If only it had been that easy to recover from 9/11. I held him and thought of the very kind people who had worked in the Hallmark store and helped me with my purchase. The store was on the ground floor, so I’m sure they all made it out ok, but I wonder if they still bear the cracks of what they saw that day. I remembered the Starbucks employee who made me my first (and last!) eggcream. I remembered standing on the street and looking up at the towers, unable to see the top of the towers. I thought to myself that anyone above the eighth floor would be screwed in a fire (I don’t look at high rises the same since my father-in-law, a former firefighter imparted this wisdom to me).  I remember thinking at the time how terrible a fire would be for anyone in the middle of the building. Who could have guessed how prophetic that thought would be?

I held this little boy in my hand and mourned the innocent look on his face. We were all that innocent before 9/11.  Tonight, as I took his photograph, I noticed some miniscule writing on the bottom. It says “find joy in all things” and I think that’s something important to carry with us. If 9/11 proved nothing else, it’s that we have no guarantees of tomorrow. We should strive to live life to the fullest every day. Sometimes I wonder what this little boy’s tune would be, and I can think of at least half a dozen pieces I have played, somber, touching music that weaves a moment from nothing but breath and metal. Ultimately, those who lost their lives on 9/11, both in New York and Virginia, were the breath that gave life to the metal that was the Pentagon and World Trade Center.  Like my little lost boy, their songs are eternal.  Their songs will endure.

In cross stitch, as in life, sometimes you just have to stop, regroup and try again tomorrow. #lifelessonsfromcrossstitch #needlework #crossstitchersofinstagram #conservation #beavoiceforthevoiceless
So I found this person on Etsy who engraved pencils and I decided to have these printed up to share with my stationery/fountain pen/letter writing pen pals as a way to spread the word and hopefully put more eyes on the Foundation’s mission. The card is from the Foundation too— makes me think of my mama @junebugjoan and her love of giraffes #williamholdenwildlifefoundation #conservation #letterwriting
Not exactly sure if this is what @officialstefaniepowers means by #conservationthrougheducation but I lost my stuff when I took out my recycling (the two paper bags on the ground) and saw reuse-able bags that had reached the end of their lives stuffed with plastic grocery bags sticking out of the dumpster. I retrieved what I could to take back to the store and decided to make my disgust a teachable moment 🌏🌍🌎🌺🌳🐐🐪🐘🦒🦩🐞🐝🐌🐤🦚🦥🦔🦦🦨🦢🐓#papernotplasticplease #recycletherightway #williamholdenwildlifefoundation #conservation
This represents about 49 hours of stitching give or take a little bit since 9/1. Stitching Mr. Holden’s initials in a different color really gave me time to reflect on the meaning of this piece. Red is the color of love and passion- it not only reflects his feelings for the people and animals of Kenya, but the deep love and respect I feel for him and Ms. Powers. @officialstefaniepowers @whwf1 #kenya🇰🇪 #conservationthrougheducation #voiceforthevoiceless #smallstepsbigchanges #wecandothis💪
My oldest #umassfootball sweatshirt— at least 12 years old, maybe 13, but always my favorite game day apparel #goumass #beatuconn
UConn brought their band? Guess I have to be nice (like hell I do GO UMass!!!!) #beatuconn