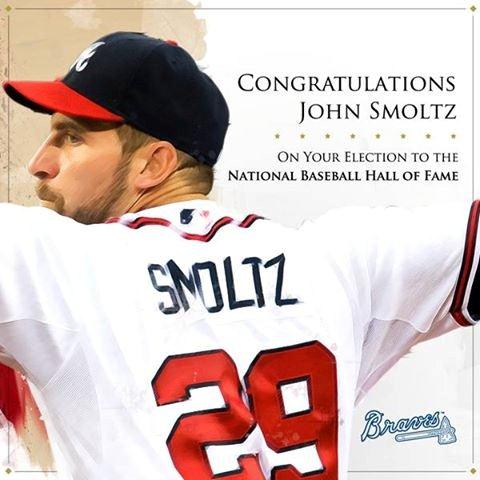 It’s easy for me to write nothing but praise for John Smoltz, as I’m a lifelong Braves fan, but I prefer to let his stats speak for themselves:

He played 21 season in Major League Baseball, all but one of them with the Braves.

He was the 1992 National League Championship Series MVP.

He was part of the ’90s starting pitchers’ trifecta that included Greg “Mad Dog” Maddux and Tom Glavine. He was switched to relief pitcher after Tommy John surgery in 2001.

In 2002 he became the second pitcher behind Dennis Eckersley to have a 20 win and 50 save season.

While playing for the Braves, he because the sixteenth member of the 3000 strikeout club.

In 2008, he split his final season between the Red Sox and the St. Louis Cardinals.

I love looking back on the glory days of Braves baseball, when Ted Turner owned the team and could be seen sitting amongst the fans with Jane Fonda, when TBS played every single game all summer long, when  Maddux, Glavine and Smoltz were unstoppable. When the Braves won two World Series, when my husband took me to Turner Field to see them on our first anniversary…

Thank you for the memories, John Smoltz.

Soon everyone will know more about me and this crazy hobby I love so much. Consider yourself warned! #commonthreadedstitcher #needleandthread. #crossstitchersofinstagram #crossstitch #hobbies #needlework
Gotta clean the kitchen before I mess it up again but peach cobbler is in my future thanks to @millstonefarmmarket and @warnerfarm1718 #naturesbounty #rurallife #farmfresh #peaches #smellsogood😍
Hey it's finally not raining😁
I'm not obsessed. I just want to be April Dancer when I grow up! @officialstefaniepowers #girlfromuncletvshow #spygirl #fearlessfemale #rolemodel #ilovestefaniepowers #respect
Another walk before the storms #greenfieldma #exercise #walk
Originally I ran this bottle through the dishwasher so I could recycle it, but it looks so pretty I decided to keep it and put my cross stitch tails in it. #runamokmaple #glassbottles #reuse #valdanithreads #orts #crossstitch #crossstitchersofinstagram #needleandthread