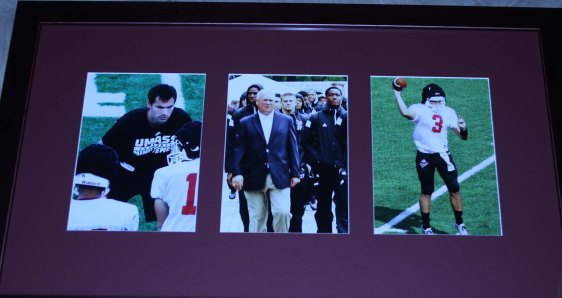 A birthday present nearly a year in the making

I couldn’t let today go by without wishing my adopted dad the happiest of birthdays!

Coach Whipple’s hardly old enough to be my dad in actuality (my dad turns 70 in November) but what I mean when I say I think of him as a father figure is that I respect, trust,  and admire him the way I do my own father. I know that if I ever needed advice or an honest opinion on something I could get that from him, and he’d give me or Bill the shirt off his back if we needed it without expecting anything in return. He’s a great role model for the young men he coaches and when he says that UMass Football is family, it’s not just an overused sports cliché. He means it. His whole family is a class act and I love them all dearly- I even refer to his sons as my “little brothers” on Twitter. Hopefully that doesn’t annoy them.

His oldest son, Spencer (the one on the left) is a coach at UMass and  Austin played for us last year as the backup quarterback. I suppose the old chestnut that all coaches sons play and eventually coach is true, at least with the Whipple family. I had the idea last spring to create a photo montage of the three of them at work, and it took a while to get the exact pictures I wanted. It was fun to go through the photos and relive the season while I looked for the perfect ones and of course, my girls at Hope and Feathers did their usual amazing job with the framing. I picked it up this past Monday and I have to say I hated having to wait a whole week for Bill to sneak it into Coach’s office – I love being at the age where giving a birthday gift is a hell of a lot more fun than getting one.

Happy Birthday, Coach! I hope you have a good day today and that this is the start of an amazing year for you and the team!

Doing some research tonight. Love that this #obviousstate notebook is dedicated to my favorite poem and poet, but i love even more how the company is dedicated to sustainability and recycling. #pocketnotebooks #paper #writtenwords #research #savetheplanet
Please join me at iamavoiceforthevoiceless.com for a special memorial tribute to Martine Colette, a conservationist who was truly ahead of her time. Thank you @officialstefaniepowers for introducing me to an amazing lady whose work on behalf of exploited animals is a lesson to us all. #martinecolette #conservation #angelesnationalforest #savetheanimals #stopwildanimalexploitation
Every once in a while, I feel the need to stab people for therapy 🤺 #chickswithswords #fencing #swordplay #fencingischeaperthantherapy #iplaywithswords #theyletmeplaywithswords
Always an inspiration to me on so many levels—thank you @officialstefaniepowers for helping me find my footing the past few years and for showing me the path I was meant to walk. I wouldn’t be where I am now without your examples of compassion, resilience and determination. #stefaniepowers #alovingheart #thankyou
Every once in a while the stars align and bring you friendships you never knew you needed. My girls Rachel Beckman and Jackie Klotz shared an amazing weekend with me and Bill, and yes, the eternally gorgeous and epically incredible Stefanie Powers was kind and gracious enough to take a photo with us. The cute puppy was Grampy, a service dog for one of the SweetHarts and the official Hart to Hart mascot of the weekend.
Not a lot of progress on my #mirabiliadesign #queenoffreedom but I’m working on the lower ruffle of her dress. I plan to work on her over the weekend. #garondesignerfocus #crossstitch #crossstitchersofinstgram #patriotic #godblessamerica🇺🇸 #redwhiteandblue #needleworkersofinstagram #linen ##dmcthreads #petitetreasurebraid #millhillbeads