I hadn’t seen any new birds at the feeder since the cowbirds showed up a couple of months ago until this past weekend, when Mother Nature gave me two beautiful gifts. On Saturday, I was piddling around the house and happened to look out the window when a small black and white speckled bird appeared. It was a little bit bigger than the house sparrows which were everywhere and the way it was pecking at the seed convinced me it was a woodpecker, but I had no idea what kind it was. I grabbed my phone and Googled “black and white woodpecker” and discovered that my new visitor was a female Downy Woodpecker.  She was very timid and didn’t stay long enough for me to get a picture of her, but just learning about her made my day and is part of what makes birdwatching such an amazing hobby. As if that wasn’t enough of a birthday present from Mother Nature, I was taking a break from cleaning up the kitchen yesterday when I happened to glance out the window and proceeded to freak out at what I saw.  There was a male goldfinch on my feeder and that hasn’t happened in the entire year I’ve been feeding the birds! Last summer, a goldfinch landed on the feeder pole but never stopped for a meal and didn’t come back; I’ve seen them in the trees but never up close like I did yesterday and it was amazing. The little guy hung around for a bit and while he was having lunch, I managed to get these photographs (pardon the dirty ground level window screen): 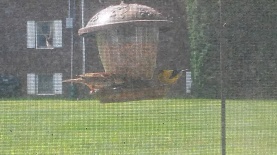 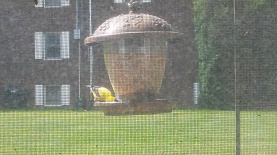 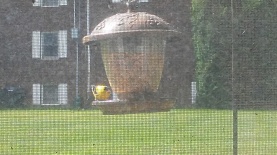 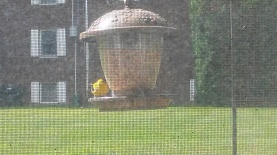 Goldfinches are such beautiful birds, a drop of living sunshine stopping by for a visit, and I am so happy that I didn’t miss him.

In other news, Thor, my sweet little buddy, has been leaving my feeder alone. Guess the talking to I gave him the other night made an impact 😉 He’s been out and about and has come up to me a few times when I’ve seen him in the parking lot or out in the back lawn. He’s always so happy to see me and comes running like we’re long lost best friends – Thor always makes me smile. He’s quite a hunter though, and I haven’t seen him with any unsuspecting victims, though his stalking stance is quite impressive. His owner told me that when they lived on a farm he went after the free-range chickens and actually killed one, so he could be a danger to my avian friends. So far so good, though. I mean, how could you not love this sweet face, even when you’re as terribly allergic to cats as I am? As long as he leaves my birds alone, we will be BFFs. 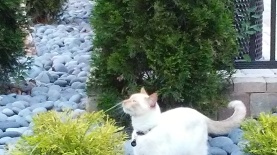 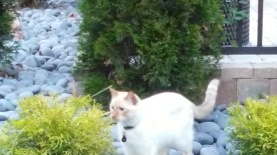 I hope this quote is true for my project for the #williamholdenwildlifefoundation but I know beyond a shadow of a doubt it is true for @officialstefaniepowers and the amazing gift of love she has given the world through her tireless conservation efforts. #StefaniePowers #conservationthrougheducation #iamavoiceforthevoicless #crossstitchersofinstgram #needleworkersofinstagram #xjudesigns #forbiddenfiberco
In cross stitch, as in life, sometimes you just have to stop, regroup and try again tomorrow. #lifelessonsfromcrossstitch #needlework #crossstitchersofinstagram #conservation #beavoiceforthevoiceless
So I found this person on Etsy who engraved pencils and I decided to have these printed up to share with my stationery/fountain pen/letter writing pen pals as a way to spread the word and hopefully put more eyes on the Foundation’s mission. The card is from the Foundation too— makes me think of my mama @junebugjoan and her love of giraffes #williamholdenwildlifefoundation #conservation #letterwriting
Not exactly sure if this is what @officialstefaniepowers means by #conservationthrougheducation but I lost my stuff when I took out my recycling (the two paper bags on the ground) and saw reuse-able bags that had reached the end of their lives stuffed with plastic grocery bags sticking out of the dumpster. I retrieved what I could to take back to the store and decided to make my disgust a teachable moment 🌏🌍🌎🌺🌳🐐🐪🐘🦒🦩🐞🐝🐌🐤🦚🦥🦔🦦🦨🦢🐓#papernotplasticplease #recycletherightway #williamholdenwildlifefoundation #conservation
This represents about 49 hours of stitching give or take a little bit since 9/1. Stitching Mr. Holden’s initials in a different color really gave me time to reflect on the meaning of this piece. Red is the color of love and passion- it not only reflects his feelings for the people and animals of Kenya, but the deep love and respect I feel for him and Ms. Powers. @officialstefaniepowers @whwf1 #kenya🇰🇪 #conservationthrougheducation #voiceforthevoiceless #smallstepsbigchanges #wecandothis💪
My oldest #umassfootball sweatshirt— at least 12 years old, maybe 13, but always my favorite game day apparel #goumass #beatuconn